Due to the Spearfish School District adding school days to makeup for snow days the following changes have been made:

Wednesday, May 29
No rehearsal for Group A and Group B
Parent meeting at 6:00pm (more info will be emailed to parents)

Thursday, May 30
No rehearsal for Group A and Group B
Please read over your scripts at home

Both groups will be using this rehearsal time for auditions – please be prepared to audition for the part you want!

Children’s Theater is opening a new chapter in 2019

For ten years — 2008-2018 — The Matthews had a summer children’s theater camp called the Peanut Butter & Jelly Players (PBJ). Traditionally, the group provided a summer theater camp to children of the area for a month, culminating in a 3-day production of a play. Children learned the art of performing, backstage tasks, blocking, set building…the whole package! Due to a very generous anonymous donor, this month-long summer program was FREE to all the children.

Starting this year, 2019, we are honoring the director of our PBJ theater camp for ALL OF  those 10 years, Ann Froelich. This summer’s program will consist of two separate performances based on age group. The name of this wonderful program is the Froelich Young Actors Guild. 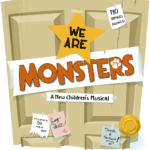 We Are Monsters is a hilarious new musical that follows human kids into a monster cabaret filled with quirky monster characters. The adventurous humans uncover vegetarian vampires and rock n’ roll werewolves, gradually realizing there may be more to these monsters than meets the eye! Most importantly these monsters and kids discover the importance of friendship and celebrating in the attributes that make each of us different and unique.

WE ARE MONSTERS is presented through special arrangement with Beat by Beat Press (www.bbbpress.com)

It’s 1956, and even though he has just become a Badger Scout, young Skipper’s life is a big mess. His next-door neighbor yells all the time, his friend Sally Ann has become obsessed with detective stories and his dog, Lucky, has gone missing. To top it all off, his mother is forcing Skipper to befriend the new kid, Jonathan, an awkward boy with outlandish tales of his monster-hunting father. With his scout guidebook in hand, Skipper sets off with Jonathan and Sally Ann to solve the mystery of Lucky’s disappearance. Is it possible there is a werewolf on the loose or are Jonathan’s monster-filled tales too incredible to be believed? Exploring the topics of friendship, self-reliance, loss and grief, Skipper begins to wonder if the answers to life’s uncertainties may be found in his guidebook or if anything — or anyone — is truly what they seem.