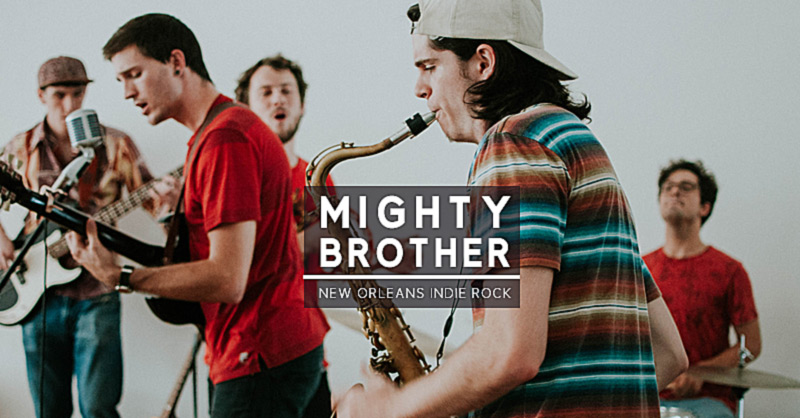 Mighty Brother is a New Orleans-based indie rock band captained by songwriters Jake Ryan and Nick Huster and crewed by a dynamic saxophonist and airtight rhythm section. Since 2014, the group has charmed audiences with their infectious brand of songwriting, soaring harmonies, meticulous arrangements, and full sail quest for collaboration. (scroll down for more details and videos)

Since 2014, the group has charmed audiences with their infectious brand of songwriting, meticulous arrangements, and full sail quest for collaboration. Mighty Brother’s 2017 expansion includes partnerships with social and non-profit missions, production of a 5-Song Music Video EP, national touring, and festival appearances.

In fact, this group headlined our 40th Festival in the Park. They fell in love with Spearfish and we with them.

The Vibe EP, Mighty Brother’s sophomore release, is a sonic departure from their Midwestern folk roots, establishing a new 5-piece lineup and a sound as eclectic as New Orleans itself. The EP explores a myriad of genres to tell five stories depicting the culture and vibe of the city. An all-star cast of local musicians and artistic collaborators can be heard on the record.

Following a generous grant from the Threadhead Cultural Foundation, Mighty Brother began tracking in early 2017 at Bear America Records, working with engineers Joe Ceponis (of Quintessential Octopus) and David Hart (of Motel Radio) to craft the sonic pallet that would become The Vibe EP. Long-term collaborator Eric Day provided mastering, and in its final form, the record features keys by David Polk, slide guitar by Carson Thielen, as well as trumpet and sax cameos by John Culbreth and Nick Ellman, the Naughty Horns of Naughty Professor. Photographer Daniel Grey of United Bakery Records shot the album and individual character artwork.

The band has built a local following in New Orleans, their base of operations. MB’s January 2017 “This Is Not Normal Tour” pairs the band’s live performances with the Gulf Restoration Network’s mission to “Defend Our Music, Defend Our Coast.” With support from the Threadhead Cultural Foundation, the band is producing a music video EP at Bear America Records. This EP is the first installment of a double album set to release early 2018.