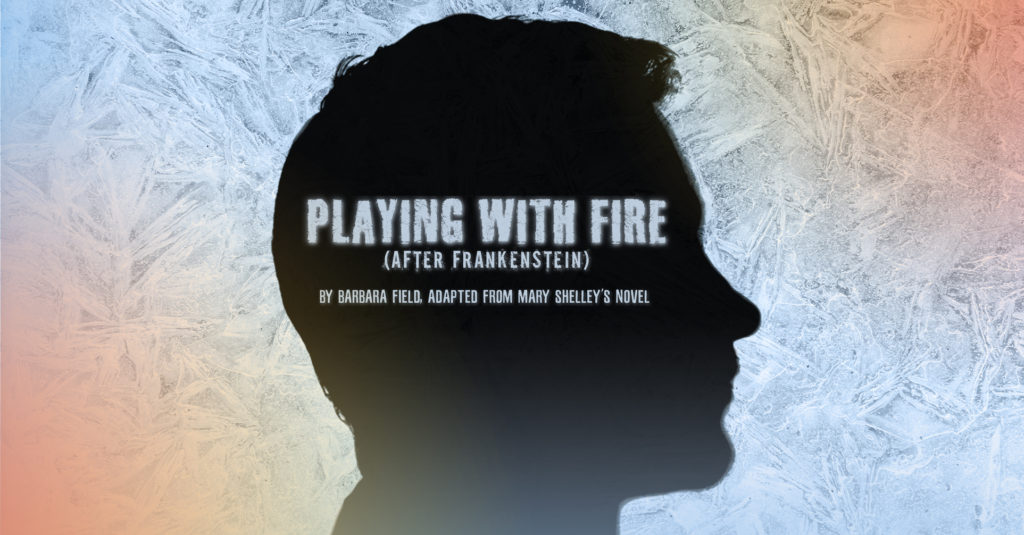 The Matthews’ community theater is excited to present “Playing with Fire (After Frankenstein)” Nov. 8-11. Dwight Myers directs a talented group of Black Hills actors. This event is subject to an adult ticket discount to our 2018-19 Subscription Series subscribers!

Adapted from the Mary Shelley novel. The author is Barbara Field.

Commissioned by the Guthrie Theater, in Minneapolis, this singular, eloquent play deals with events which transpire after those usually associated with the Frankenstein story—in this case, the final, fateful meeting between Dr. Frankenstein and his macabre creation amid the barren wastes of the North Pole.

Widely toured throughout the United States, the Guthrie production was received with unanimous popular and critical acclaim. 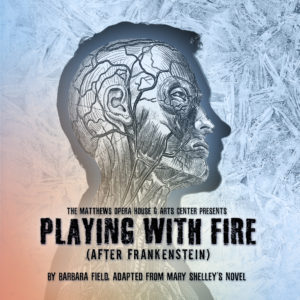 As the play begins, an exhausted and dying Victor Frankenstein has finally tracked down his Creature in the lonely, frozen tundra of the North Pole. Determined to right the wrong he has committed to destroying the malignant evil he believes he has created. Frankenstein finds that he must first deal with his own responsibility and guilt—for, as their fascinating confrontation develops, it is evident that the Creature has become a pathetic, lonely and even sensitive being who only wants to find love and that he, Frankenstein, by intruding into the very secrets of life, is truly the evil one.

As the two debate, scenes from the past flash by: Frankenstein’s young bride, whom the Monster killed out of pique when the scientist failed to provide him with a mate of his own; the brilliant, quick-witted Professor Krempe, Frankenstein’s university mentor; and moments between the youthful Victor and his brother, who also fell victim to the Creature’s vengeance.

Ultimately the exchange between Frankenstein and the Creature becomes a confrontation between parent and child, scientist and experiment, rejection and love, and even good and evil—culminating in the Creature’s agonizing question, “Why did you make me?” It is a question the exhausted Frankenstein cannot answer and, as the play ends, the Monster lives on, condemned to pass his remaining days in the awful loneliness he has so desperately sought to escape.

Max G. Merchen – “Much like Victor Frankenstein who took exanimate objects and jolted them back to life, I strive to bring the printed page (inanimate object) to life, and in so doing, touch the very center of your being.” A special shout out of appreciation to my groupie, supporter, and critic…Lisa thanks for hanging in there!

Colin Hanzlik – After being in every play in High School, Colin during his 23 years as an Army Officer, directed and acted in “A Christmas Carol”, “The Farndale Housing Estate Townswomen’s Guild Dramatic Society Production of MACBETH” and several other plays of both notable and notorious nature. His recent activities at The Matthews Opera House include parts in “Theatre on the Run”, “The Phantom of The Matthews Opera House” and “The Nerd”.

JD Schroeder – JD is a Senior here at Black Hills State University. He is majoring in Theatre and minoring in photography. He is the President of the BHSU theatre organizations. (Theatre Society and Props & Liners) Playing with fire is JD’s second production he has been involved in at The Matthews Opera House. You might remember JD in the past two productions of “The Phantom of The Matthews Opera House” as Peter Penn and the ever so lovable Buster.

Tytus Spivey – Tytus is originally from Georgia, he moved to Wyoming 12 years ago. Then here to Spearfish for college. That is where he fell in love with the performing arts, which lead him to The Matthews Opera House. “Live in the moment, unless you can act then you get to live in several”, that is what Tytus believes and strives for.

Hailey Hanzlik – Hailey is a junior at BHSU and has been in 20+ plays since she first moved to Spearfish in 2007. Her hobbies include singing in the university choirs, reading gothic horror, and playing Skyrim.

Steve Case – Steve is a pharmacist by trade educated at SDSU and the University of Florida. While working at Regional here in Spearfish he became a debate judge while his son was on the debate team. Inspired to pursue a dream of performing on stage by all the talented kids, Steve auditioned for the play. Steve would like to give a special thanks to the cast for all of their great tips, and to Pen and Britt for all of the hours reading lines with him.