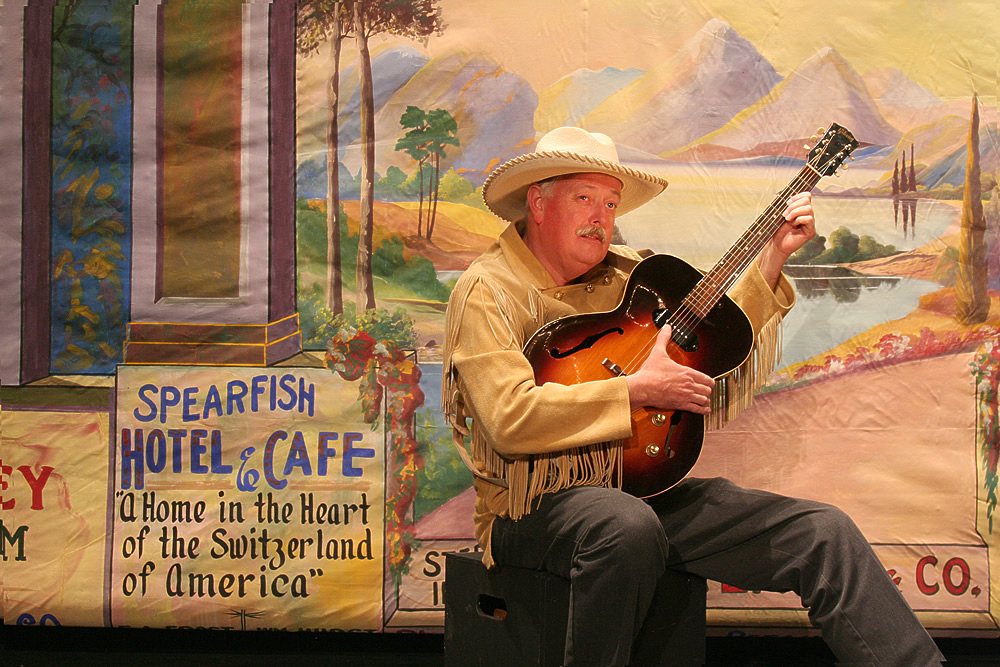 Live on stage:
“DEADEYE’S WILD WEST — or Subterfuge in Spearfish”
Ripped from the pages of dubious Black Hills history! Punctuated by original toe-tapping music!
DEADEYE’S WILD WEST plays every Monday, Tuesday, and Wednesday night at 7:30, starting after the Fourth of July weekend and then running the rest of the month. The show features the big talent of Randy Bender (pictured) as old Deadeye Dan himself. Music composed by Scott Simpson, directed by Jon Steven Wiley, and written by Paul Higbee.

“Deadeye’s Wild West, or Subterfuge in Spearfish”, is a family-friendly, fun-filled story with original music by Scott Simpson.  Paul Higbee wrote of a time in Spearfish’s past when a traveling Wild West Show came to town.  Local darling, Rosie, has a beautiful voice that might be added to the show, but she would have to leave the beautiful Black Hills to do it.  But, Ma is suspicious, and thinks thar might be some ‘subterfuge’ going on.  Could Deadeye be on the level?  Does Rosie have anything to fear?  Could we find ourselves in a better spot to laugh?  Music will fill the historic theatre, as the story unfolds.

Director, Jon Steven Wiley, said it is a real treat to be working again with Paul Higbee, the playwright of “Deadeye’s Wild West, or Subterfuge in Spearfish”.  They have worked on many projects through the years.  Jon Steven can remember ‘tar and feathering’ a villainous Paul Higbee in a melodrama years ago, as well as being the villain to Paul’s hero in others.  In The Vaudevillians”, Paul’s tribute to entertainers of yesteryear, Wiley created several characters in the guise of doing a vaudeville show.  They have worn different ‘hats’ through the years, but the outcome has always been fun.  Scott Simpson, the musical composer and arranger, has also commented on how delighted he is in working with Higbee on a stage presentation.  The three together make up quite the team, and their exuberance is shown in the production.

Onstage in a 1906 historic theater

Performances are staged in beautifully restored Matthews Opera House, one of the West’s oldest and most beloved venues. Located at 612 Main Street, Spearfish, the opera house is part of the Spearfish Arts Center. It first opened its doors to theater-goers in 1906.

Message from the Director
Back drops were used in theatrical productions for centuries, and were a staple to any reputable opera house.  It was the same here at the Matthews.  Some of our earliest records are from the purchasing of drops.  We are proud to be using historical roll drops for this production.  For the first scene, we are using a professionally produced roll drop from around 1919, which was purchased from the Twin City Scenery Company in Minneapolis.  Our interior drop was created by local artist Laurie Williams-Hayes.  And finally, the last drop also dates back to around 1919, but was created specifically for the Matthews.  Many of the businesses listed are well-known.  The drop was originally used in lieu of a front curtain, and sometimes referred to then as an oleo drop.  In 2007, artist Jenny Braig was commissioned to re-furbish the drop and bring it to its original splendor.  This drop is believed to have been used when silent movies were first presented at The Matthews, sometimes on a mixed billing with live acts as well as silent films playing in the same evening. They were witness to a time when children could bring their parents to the theatre and enjoy.  I hope you find that the same is true today.

We invite you to step into history, take a seat, and settle in for a rip-roaring show that’s all music and laughs. Check for more great entertainment throughout the year on the opera house stage including theatrical productions, concerts, and various live entertainment acts.

MEET OUR CAST and CREW! 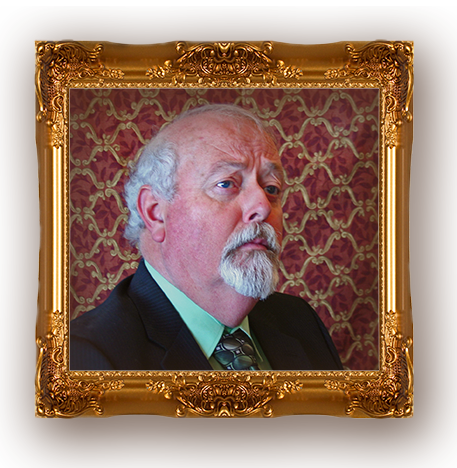 Randy Bender
Randy’s family moved to the Beautiful Black Hills in 1967 and he thought he’d died and gone to heaven!  He did leave the area for 30 years while he traveled with a repertory theater company (he told his parents he’d run away and joined the circus).  During that time he traveled across four continents and performed over 16,000 times.  His audiences ranged from several thousand at a festival at Niagara Falls to the students of a bush school in South Africa to members of the Royal Family in Swaziland and troops on the DMZ in Korea. He returned home in 2004 where he combines his love of theater and local history by continuing to perform throughout the Hills Region and presentations at the Old Fort Meade Cavalry Museum 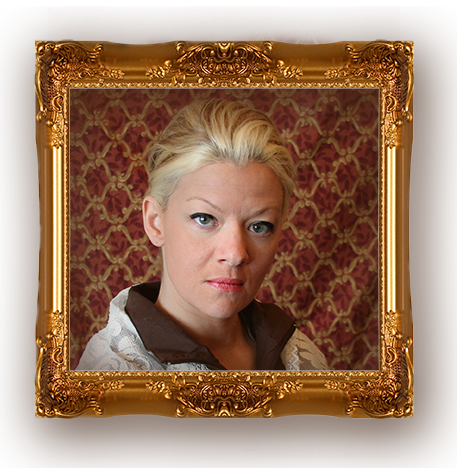 Sarah Carlson
Sarah’s theatrical talents are vast and varied.  Presently she is the executive director of the Historic Homestake Opera House (HHOH) on Main Street, Lead. She spent nearly 15 years in Sioux Falls singing and acting in community theatre and in improv groups.  She has worked with United Way and also the Downtown Sioux Falls Revitalization design committee.  She continues to volunteer for nonprofit organizations in the Northern Hills. While in Sioux Falls, Sarah was frequently heard on the radio and seen on the television in her many commercial appearances.  She enjoyed 9 years as an on-ice promotions emcee for Sioux Falls USHL Stampede Hockey. Carlson moved to Lead in 2008 to work for TDG Communications, an advertising firm and strong supporter of the arts while serving as a HHOH performer, marketing chair, and board secretary. Sarah is well known in the Black Hills for her theater portrayal of Calamity Jane. 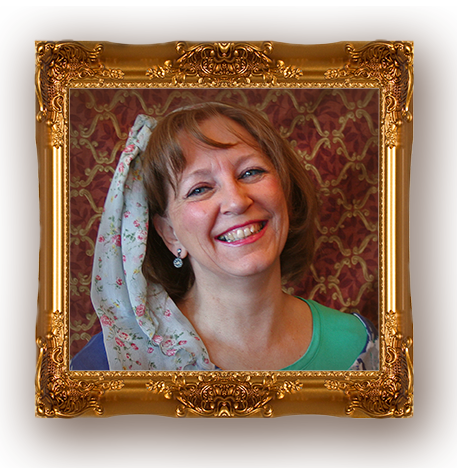 Janet Higbee
Janet’s acting has led her to tour theatres around the country and also Canada.  Acting is not her only talent, though.  She has directed and also taught voice and piano for many years. Locally, she has acted in over twenty productions and has directed many as well.  Some of her favorite roles are Sister Amnesia, from “Nunsense”, Maria from “The Sound of Music”, and playing Grandma to little three year old Kirby. 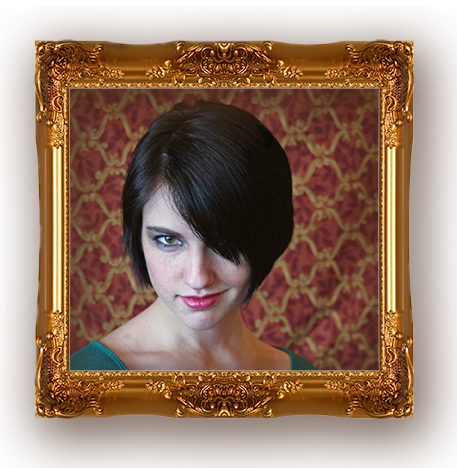 Hannah Lessly
Hannah will be a senior at Spearfish high school this fall, and stays plenty busy with choir and speech when she is not performing. She has been in multiple productions at the Matthews Opera house, and recently, she has had the opportunity to perform in, “Oklahoma!” (Laurie), “Les Miserables” (chorus member), “Little Shop of Horrors” (Mrs. Mushnik), and “Clue: The Musical” (Mrs. White)!  It is wonderful to have her talent on our stage once again.

Jon Steven Wiley – Director
Jon Steven fell in love with the theatre at an early age and has participated in community productions since the 60’s.  He studied theatre at Black Hills State and appeared many times on this very stage in the 70’s.  He has been a tech for national tours, taught summer theatre, and was in the original touring cast of “The Vaudevillians”. He joined the company at Conklin’s Dinner Theatre in Central Illinois, where he eventually became a resident director.  This will mark Jon Steven’s fifth production at the Matthews since retiring and returning to the wonderful Black Hills.

Scott Simpson – Composer, Musical director, Strings
Scott has been an actor, director, writer and teacher.  He has been singing, performing and composing music from age seven on.  Since 2000, Scott’s released 17 independently-produced albums, each recorded and produced in his Spearfish studio, Dancin’ Moon. He has composed music for 5 films and enjoys working collaboratively with other writers, performers and directors.  It has long been a dream of Scott’s to compose a musical for the stage. His love for Spearfish, the Black Hills and for Americana music made this collaborative effort with friend and writer Paul Higbee a perfect fit.

Tickets for DEADEYE’S WILD WEST are $12 for adults and $6 for anyone under 18.