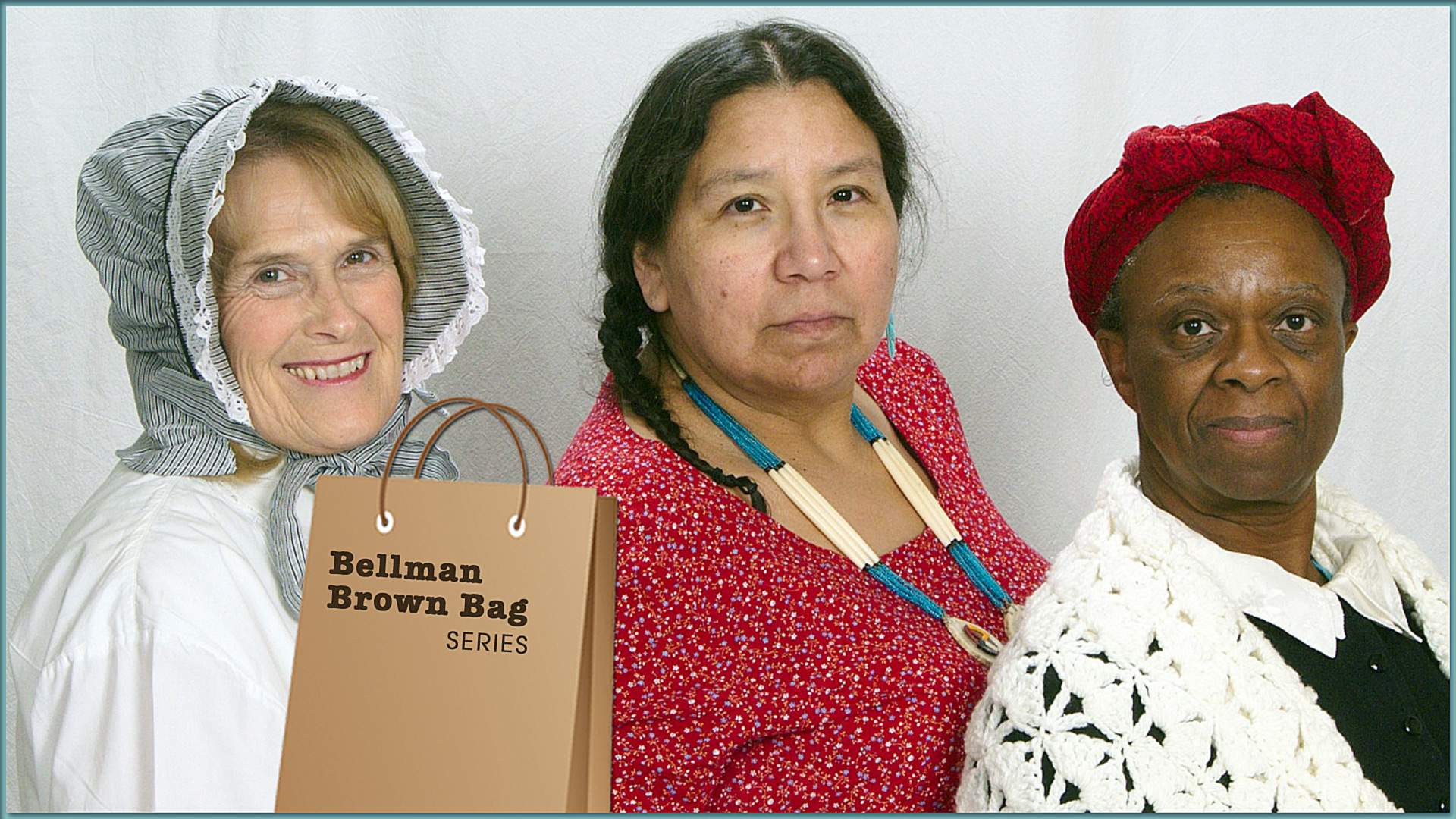 “All things are bound together. All things connect.” Chief Seattle, 1854

In honor of Women’s History month, we are proud to present “Dakota Daughters.” This event is brought in from the Humanities Speakers Bureau. “Dakota Daughters” is about the settlement experience from the perspective of three women — one black, one white, and one Native American.

Geraldine Goes In Center, Oglala Lakota, and her parents, Eva and Nathaniel Witt, are from the Lip’s (Pute) Camp Tiospaye (Wamblee SD). She prides herself on being Ina (mother) to four strong Cunkshi’s (daughters) and Unci (grandmother) of many beautiful Takojas. She served in the US Army from 1974-1982 (Vietnam Era veteran). Jerry earned a BS in Human Service and a minor in counseling from Oglala Lakota College. She is a published writer and has self-published three booklets: Jokes Heard around the Rez, Lakota Recipes, and Lakota Baby Naming Book. In business for the past several years, she makes and provides Buffalo Wasna and gives presentations on Lakota diet and foods.

Lillian Witt grew up on a South Dakota ranch and attended a small country grade school and won first place in her first speaking contest in first grade at six years of age. She earned a BA in Journalism/History at Chadron State College, Chadron, NE, and is a published author in Outside the Lines, a book of student essays published by CSC to be used by history college professors, and Tenth Street Miscellany, a collection of stories and essays of graduating students. She is a free-lance writer and is currently writing a book that is almost ready for publication. Lillian’s proudest accomplishments are her six children and eleven grandchildren.

Joyce Jefferson earned a BS in English from Black Hills State University. Through her business, Joyce Jefferson Creates Stories in Song, she provides performances that weave narration, poetry, and song. She is an independent scholar with the South Dakota Humanities Council. Joyce tours the state educa-taining audiences about African American sheroes. Jefferson and the It’s About Time Committee mounted an exhibition of historic photographs called “Corporals, Cooks, and Cowboys: African American Pioneers in the Black Hills” at the Journey Museum in 2000. She also self-published Black & Other Friends, a book of poetry inspired by her research. Joyce recently toured with The Women’s Lawyers Club, a product of Periaktos Productions.

What is the Bellman?

The Bellman Brown Bag series is a humanities program designed to explore ideas, history, literature, art, and culture.  Programs are presented on the second Wednesday of each month, noon to 1:00 p.m.  Designed to begin and end within each lunch hour, patrons are invited to bring their lunch, if desired, or simply enjoy an hour of learning and entertainment.