Due to recent developments of the COVID-19 pandemic and the current CDC guidelines on gatherings over 50, we have decided to cancel our upcoming concert with Chris Huisenga. Keep an eye on our Facebook page and website over the next few weeks as we find new ways to continue promoting local art in the Northern Hills area. Stay safe and healthy! 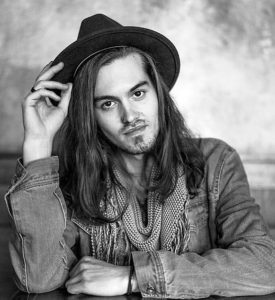 Chris Huisenga is a South Dakota based singer/songwriter whose style can be described as anything from rhythmic blues rock to Indie acoustic and everything in between. His lyrics focus on honesty. Anyone can find something to relate to in his words and music. Chris draws from a range of influences from Nine Inch Nails, Gary Clark Jr., and Foo Fighters, to Fleetwood Mac, Ari Hest, and Underoath.

In August 2017, Chris was named the Songwriter of the month by the South Dakota Songwriter’s Association and was featured in their collection of the “Singing Buffalo Sessions” EPs.

Chris released his debut album “All My Friends & A Girl” in April 2018, and has since been busy writing new material and playing shows in support of his album.