The Matthews Opera House & Arts Center is excited to present The Kithship Collective in partnership with author, folk-musician, and shepherd Eliza Blue on Sunday, October 2 at 2 pm in the Matthews theater!

The Kithship Collective’s objective is to preserve, share, rediscover, and reimagine melodies from the grasslands. For this installment, Eliza will be hosting Lakota flutist and hoop dancer Kevin Locke, and North Dakota folk-singer and rancher Chuck Suchy for an interactive, family-friendly afternoon of stories, songs, and dancing.

Kithship = a relationship built on shared knowledge of place

Eliza’s inspiration for creating the collective:

“The grassland ecosystem is one of the most endangered on the planet and one of the least appreciated…and this ecosystem’s biodiversity and potential for carbon capture is exceptional!

I began work for the collective as a series of invocations of praise and prayers of gratitude for the prairie, for healing, for understanding and for rebuilding our relationships to this place and to one another. I wanted to write love songs to all there is to fall in love with. I wanted to write songs people could dance to together, and I wanted to find other musicians and artists who were interested in doing the same thing. I hope the Kithship Collective can be the start of a bigger movement of embracing the beauty of the world, and learning to better cherish it and all the beings who call this place home.” 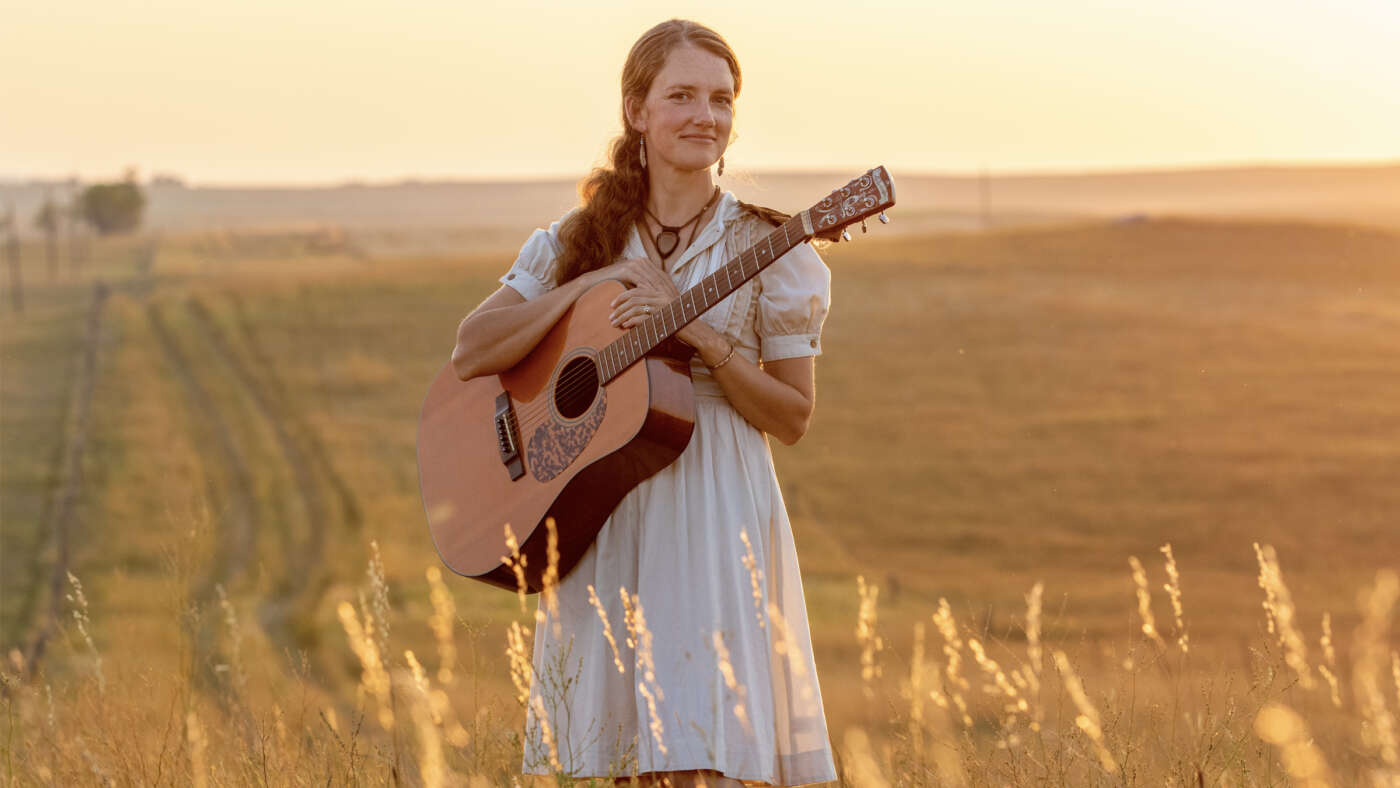 Eliza Blue is a folk musician, writer, environmental advocate, and rancher residing in one of the most remote counties in the contiguous United States, Perkins County, South Dakota. She writes a weekly column about rural life, Little Pasture on the Prairie, that is carried by 17 different print publications, writes and produces seasonal audio “postcards” from her ranch for South Dakota Public Broadcasting and Prairie Public Radio, and released her first book, Accidental Rancher, in 2020. Her writing on rural life has also been featured in the New York Times, The Guardian, and she is regular columnist for The Daily Yonder, a national publication for and about rural people. Blue’s latest project, a traveling concert television show for PBS that celebrates rural culture & arts called Wish You Were Here with Eliza Blue, was recently nominated for a Midwest-Emmy, and is now filming its third season.
For more, catch Eliza’s visits with North Dakota troubadour Chuck Suchy on PBS’s Wish You Were Here: Bohemian Hall and Kevin Locke on Wish You Were Here: Tuttle, North Dakota. 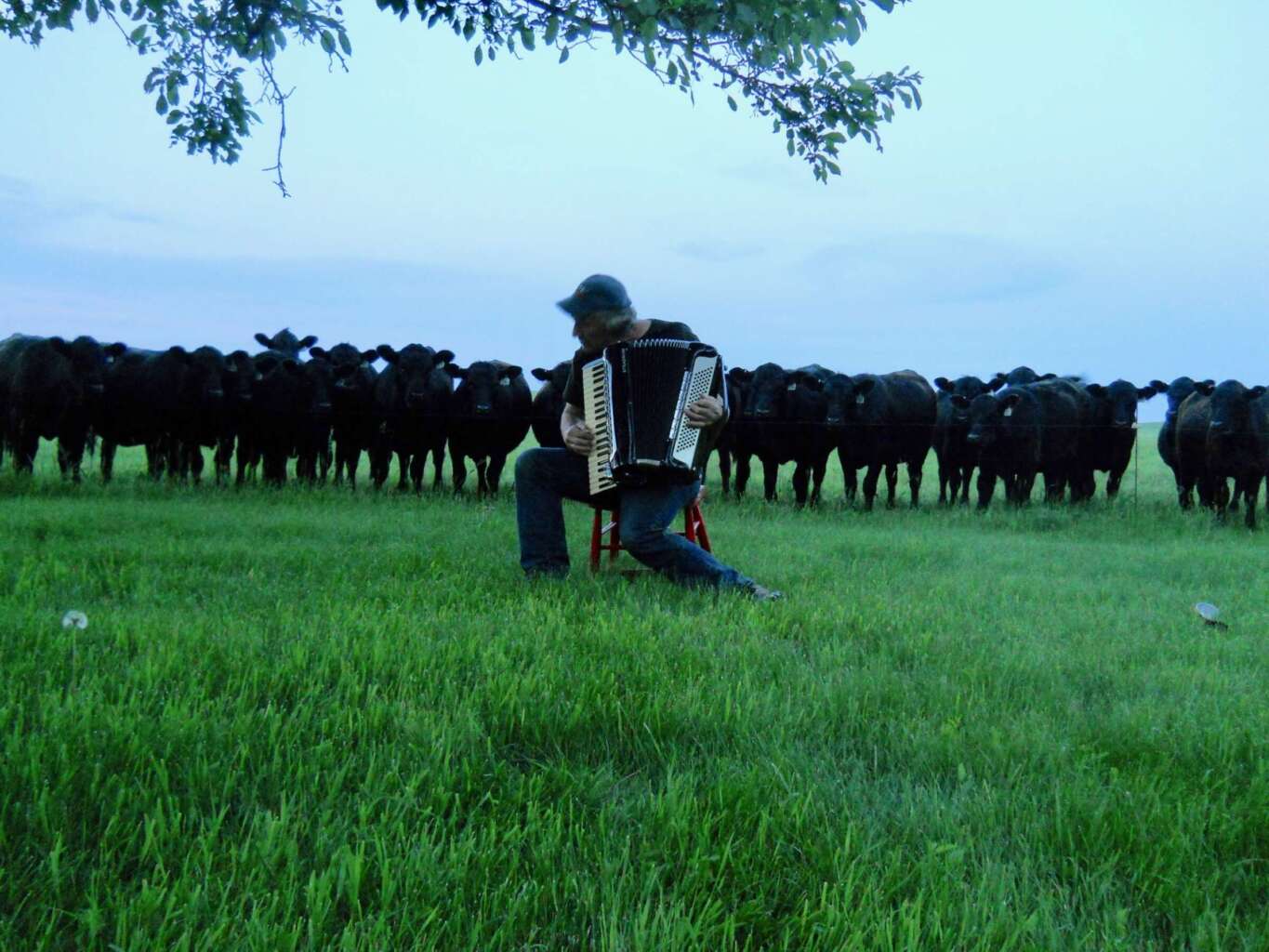 Singer/songwriter Chuck Suchy (soo’ key) is a working North Dakota farmer whose original universally-themed songs and stories have earned him broad acclaim and esteemed venues including Garrison Keillor’s A Prairie Home Companion, the Smithsonian Folklife Festival and many other major music festivals across North America.
The late Rod Kennedy, founder of the famed Kerrville Folk Festival, called Suchy “One of the great American songwriters.” Folk music magazine, Dirty Linen says of Suchy: “Ya gotta love this guy!  He writes a great song, plays solid guitar, sings with rare confidence and lives his material!” In 2015 he was awarded the North Dakota Governor’s Award for the Arts 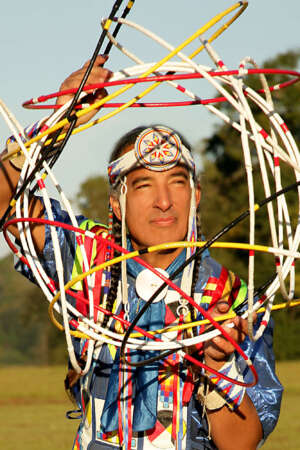 Kevin Locke (Lakota name: Tȟokéya Inážiŋ, meaning “The First to Arise”; born 1954) is Lakota (Hunkpapa band) and Anishinaabe. He is a preeminent player of the Indigenous
North American flute, a traditional storyteller, cultural ambassador, recording artist, fluent Lakota language and sign language speaker, and educator. He is most known for his hoop dance, The Hoop of Life.
Born in 1954 in Southern California, at the age of five years Locke moved north with his family, later to settle in South Dakota on the Standing Rock Reservation in 1966. It was from his mother, Patricia Locke, his uncle Abraham End-of-Horn, mentor Joe Rock Boy, and many elders and relatives that Kevin received training in the values, traditions and language of his native Sioux culture. He is frequently cited as an ambassador of Native American culture to the United States and the world.
Mr. Locke attended the Institute of American Indian Arts in New Mexico for high school and earned a master’s degree in educational administration from the University of South Dakota. He taught himself to speak Lakota, his ancestral language, as a young adult. Mr. Locke learned the hoop dance, which had nearly died out, from Arlo Good Bear, a Mandan Hidatsa Indian from North Dakota. Since 1978, he has traveled to more than 90 countries to perform.
Mr Locke uses folk arts to emphasize universal themes that are integral to all peoples. Universality of human spirit, its inclination towards peace, balance, harmony, and a longing that all human beings have for the Divine Springtime are a few central themes that he displays in his hoop dance, which is essentially a prayer for the unification of all mankind.