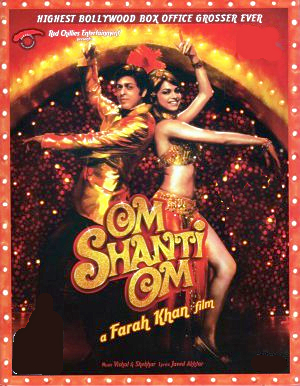 With English subtitles.
Love and dreams follow two starry-eyed actors across three decades and two incarnations in this splashy Hindi musical. It’s the early ’70s, and Om Prakash Makhija is a young would-be actor who has been playing bit parts in Bollywood musicals while looking for his big break. Om’s ambition is to become a film star and win the heart of beautiful screen siren Shantipriya, and his pal Pappu and his mother, Bela, both encourage him not to give up on his dreams. One day, Om meets Shantipriya on a movie set, and he feels as if destiny is finally smiling on him, but when he overhears her having an argument with studio chief Mukesh Mehra, Om senses things are not as they should be. Before Om can decide what to make of his misgivings, the studio burns to the ground, claiming the lives of Om and Shantipriya. Thirty years later, a bit of Om’s spirit seems to live on in Om Kapoor, a popular film actor with a large ego and a fear of flame who was born the day the old studio burned down. Despite his fame, Om is lonely, at least until he meets Sandhya, a shy but eager would-be actress looking for her chance to become a star. Om Shanti Om was directed and co-written by Farah Khan, who was a top choreographer in the Indian film industry before moving up to the director’s chair, and features guest spots from a number of Bollywood’s greatest stars, a few appearing in the form of digital recreations taken from films of the ’70s.