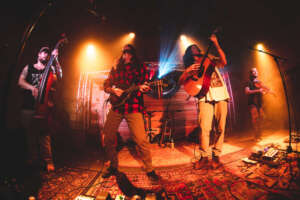 Sicard Hollow is a four-piece progressive bluegrass band who formed with a mutual passion for pushing the boundaries of genre. Heavily influenced by the Grateful Dead and New Grass Revival, these young pickers bring new energy to a timeless style with a combination of fearless improvisation and instrumental prowess.

The band formed through mutual connections within the Nashville music scene who all wanted to play something different. They were all simultaneously discovering bluegrass while existing in their other scenes. Once they got together, the rest was history.

Having toured extensively around the country since 2018, this group of players continues to grow their sound with every performance. With the release of their debut studio album, ‘Secret of the Breeze’ (2020), a live album called ‘Live at Brooklyn Bowl Nashville’ (2021), and their upcoming sophomore studio effort, there is no slowing down for Sicard Hollow.