Eliza Blue: Live from the Ranch 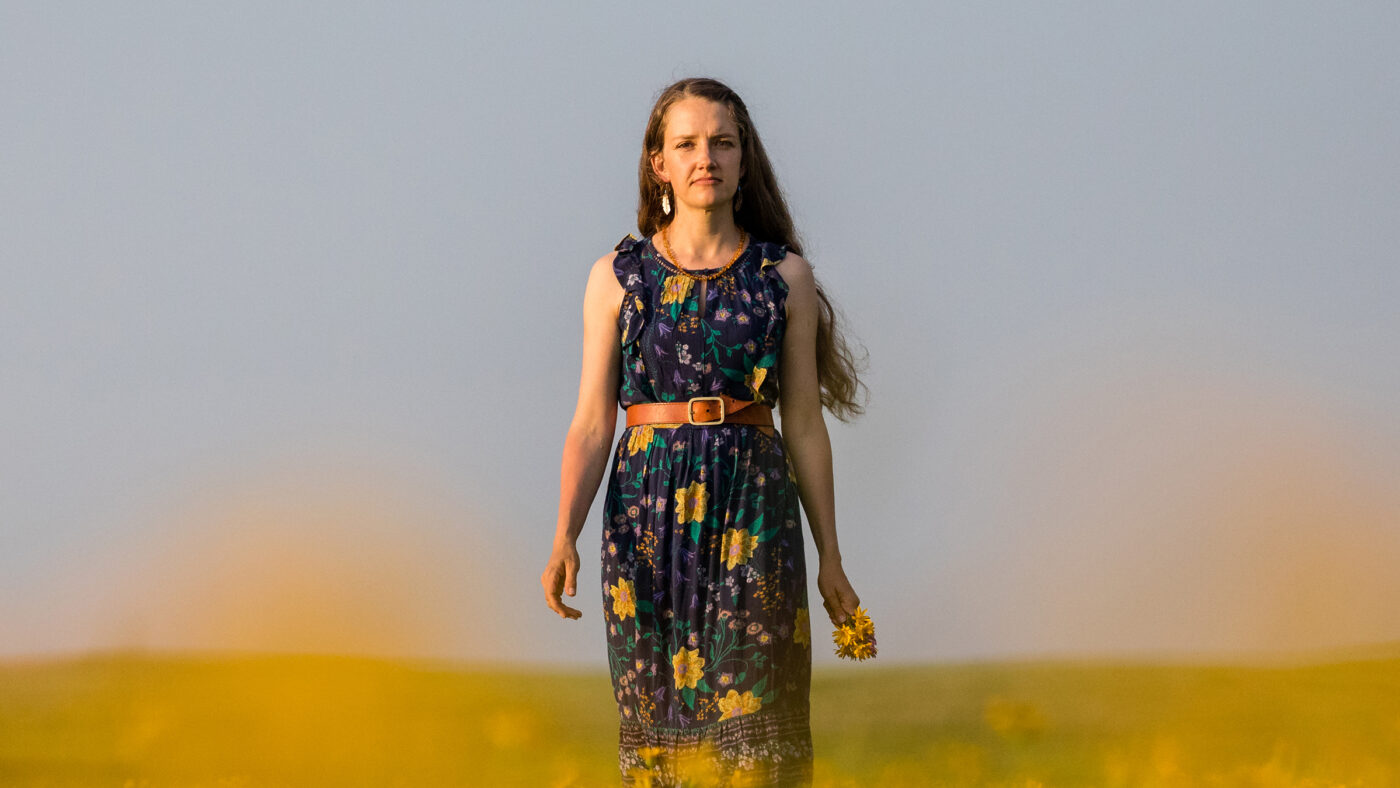 Streaming live from her ranch in Northwestern South Dakota, join writer & folk-singer Eliza Blue with special guest Todd Larson of Eclectic Wreck for a special Facebook Live performance on July 9 at 7:00 pm MT. Eliza will be sharing songs as well as stories from her new book “Accidental Rancher.”

When Eliza Blue first moved to northwestern South Dakota, she didn’t plan on staying long. After all, the singer/songwriter had spent most of her adulthood hopping from place to place. But then she fell in love with a Perkins County rancher — and the land, the wind, the livestock and the giant blue expanse of a West River sky.

Now the former urbanite tackles her daily duties on the ranch — bottle-feeding bum lambs, milking her dairy cow, Rita, and wrangling two young children — while somehow finding time to contemplate and write about life on the high plains. In Accidental Rancher, Blue shares a collection of these writings, bringing a new voice and a musician’s grace to the culture of rural America.

Eliza Blue is a shepherd, writer & folk-singer. In addition to her weekly column ‘Little Pasture on the Prairie,’ which is carried by eleven different print publications, she is a regular contributor to South Dakota Public Radio and Prairie Public Radio with her monthly series: ‘Postcards from the Prairie.’ Her first book, Accidental Rancher, a collection of essays about her transition from urban musician ranch wife and mother, is out now.

After years on the road as a traveling musician, Eliza now works in regenerative agriculture raising fiber sheep and grass-fed cattle with her husband and two children. 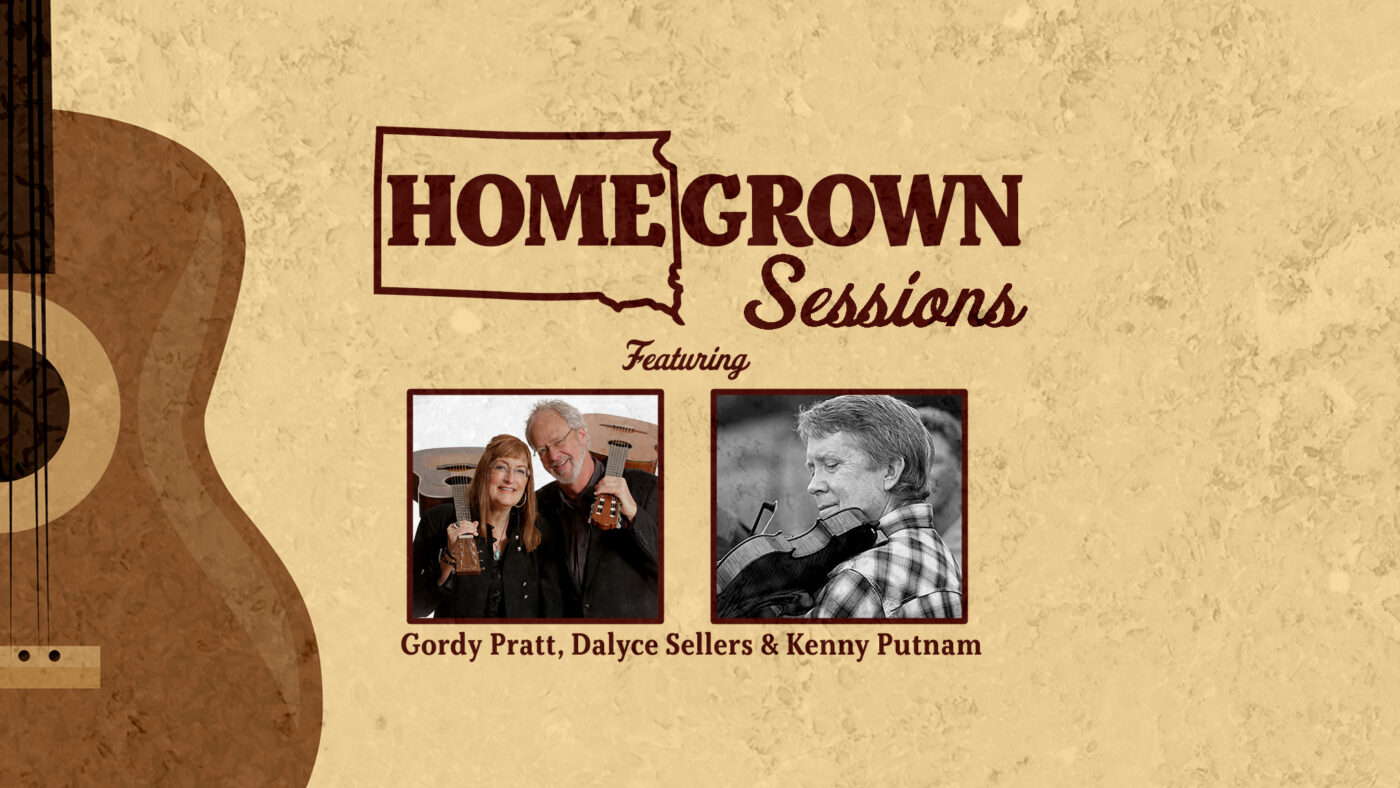 Performing first as part of our Homegrown Sessions will be Gordy Pratt, Dalyce Sellers, & Kenny Putnum. Enjoy an afternoon of western music and even some harmony yodeling! This free concert will be Mother’s Day matinee (May 9 at 2:00 pm), so this is the perfect way to celebrate the day with the incredible mothers in your life. A cash bar will be available with beer, wine & soda for purchase.

This production will be general seating, so no advanced reservations are required. A free-will donation is suggested. All proceeds go to the Matthews Opera House & Arts Center

KENNY PUTNAM Two-time South Dakota Fiddle Champion with special guest hosts Gordy and Dalyce. Putnam toured and recorded with Roy Clark for over seven years appearing on The Grand Ole Opry, The Tonight Show, Hee Haw regularly, and many other programs. He performed in 48 states, Canada, Bulgaria, and Russia. He has performed on stages worldwide, including the John F. Kennedy Center for the Performing Arts, Caesars Palace in Las Vegas, and the Oktober Hall in Leningrad, USSR to name just a few. He has performed on many recordings and television programs and has been part of three different Grammy-nominated and winning shows and recordings, the last being in 2017.

DALYCE SELLERS Her first public appearance was in her kindergarten bathroom. “My teacher realized I’d been “going to the bathroom” for an awfully long time. She found me on the throne singing my heart out, lost in the acoustics, and said: Very nice Dalyce. Back to class. That’s when I knew I was destined for greatness.” Dalyce fulfilled her parent’s dream by quitting music school and joining a new wave band. “I was on my way to fortune and fame! Then I met my husband, Michael Sellers. He chased me around for a couple of years when I was playing with a national touring band. I finally gave up.” Mr. & Mrs. Sellers live over by Sundance.

GORDY PRATT Two seasons with SD Acoustic Christmas cemented his valued professional relationship with Kenny. He has appeared on ABC’s Good Morning America and opened for Kenny Chesney, the Nitty Gritty Dirt Band, The Beach Boys, and many more. A veteran entertainer, extraordinary guitarist, comedy writer, and published songwriter, Gordy has performed his stand-up musical comedy for hundreds of corporations & associations. His historical show: Seth Bullock: The Spirit of the West has had over 1000 performances. Gordy “grew up” at the Black Hills Playhouse & studied classical guitar and ancient music at Ithaca College, Ithaca, NY, Royal College of Music, London; and the San Francisco Conservatory of Music. 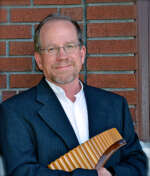 Rodney Garnett has performed extensively as a free-lance musician in orchestras, jazz and chamber music ensembles, folk music ensembles, and recording studios. As an educator and performer he played solo piccolo for eight seasons in the Colorado Ballet Orchestra, received the 2003 Wyoming Governor’s Arts Award, was the 2007 University of Wyoming Presidential Speaker, served as a Fulbright researcher in the Republic of Moldova during 2010-2011, and toured and recorded with the Irish folk ensemble Colcannon. He continues to be an active musician, performing with the Ward Johnston Trio and Boland-Dowdall Duo, initiating and coordinating the activities of the Black Hills Balinese Gamelan, and assisting with music for worship at Spearfish United Methodist Church. 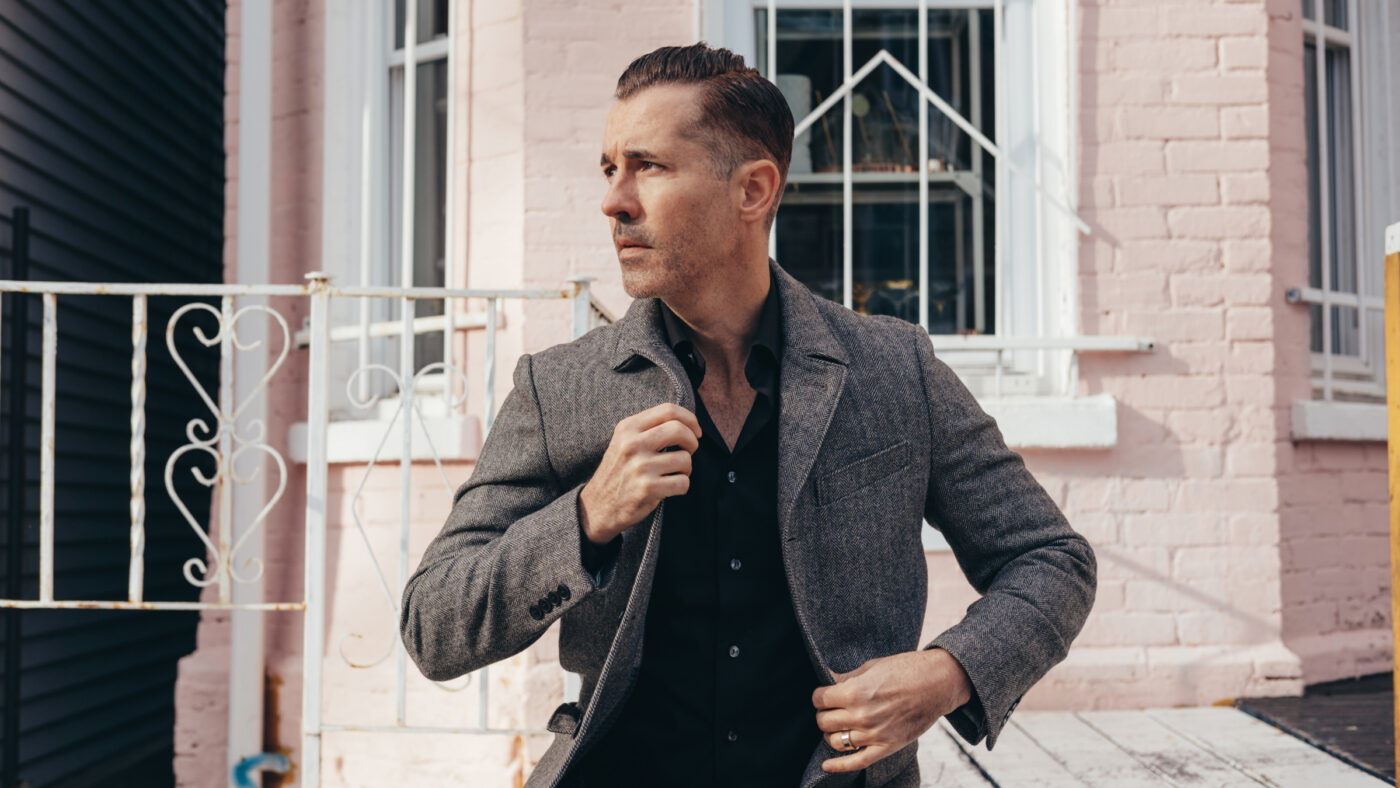 Canadian singer, songwriter, multi-instrumentalist and producer Royal Wood has established himself as a true musical talent. Since being proclaimed “Songwriter of the Year” by iTunes, Wood has continued to evolve and hone his musical craft – maintaining an unmistakable identity while uncovering and reinventing his sound. Wood has two albums that have debuted in the Top 30, multiple JUNO nominations and a #1 added song at Hot AC radio. His songs have been heard on high-profile sync placements like “Grey’s Anatomy,” and “Private Practice.”

Hank Harris and the Hegg Brothers 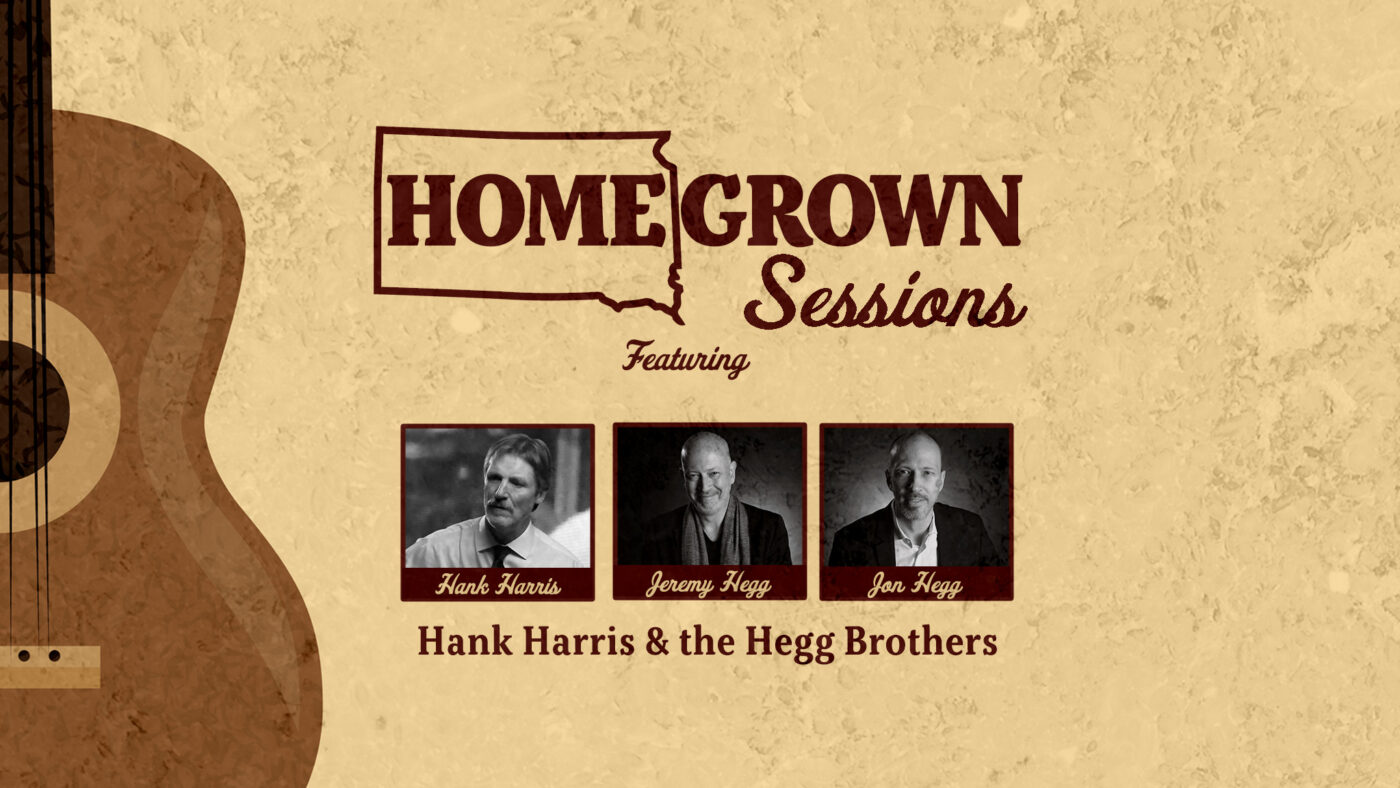 Performing next as part of our Homegrown Sessions will be Hank Harris and the Hegg Brothers. They will be joined by special guest Jimmy Goings. Enjoy an evening of acoustic folk with local musicians. This performance will be Friday, October 29. Tickets are $20 adults, $10 youth & BHSU students. General seating. A cash bar will be available

HANK HARRIS
My musical journey performing in South Dakota has taken me at least a half a million miles through hundreds of towns, stages large and small, ballrooms, opera houses, libraries, museums, bars and eateries, museums, community theaters, schools and cow pastures. From crowds of 15,000 to intimate small settings. Thousands of people met, though I can’t remember all their names.

Playing with South Dakota Rock and Roll Hall of Fame bands (DD and the Fayrohs, Red Willow Band and R&B Supply), solo, duos, trios and an occasional 10-piece horn band has offered me a continuing musical education and opportunity to pursue a life of creating music. Many thanks to the fellow musicians and audiences that have made this possible. Through these journeys, writing and chasing songs has been a common thread. By drawing from my road experience, my work with the Adams Museum (Two CDs, Deadwood Songbooks I and II), The South Dakota Railroad Museum (Currently researching and recording a CD collection of train songs),12 years as a part of SD Arts Council Touring Artist program, and 40 years of writing my own songs, in performance I tell the stories of how these songs come to life. Illuminating the tales of songwriters, the historical context, inspiration and the writing process itself. To tell the stories of the storytellers and their journeys, and then play the songs and let them speak for themselves. It’s all about the story. And the stories are funny, poignant, enlightening, heartfelt, silly and span the wide and emotional landscape of the human experience.

JONATHAN HEGG
Jonathon Hegg is the youngest of three musical sons whose parents were lifelong music educators. He graduated from Augustana College (now University) with a degree in musical performance. His joint efforts with his brother Jeremy began with Spooncat! and has moved into duets with him as well as numerous larger configurations. He has had the extreme pleasure to play what he refers to as second keyboard and background vocalist as well as being the mixing engineer of the albums made by Spooncat!, Holiday Jam, and anything Hegg Brothers related. He performs music for a living, which began with his first of three years with A South Dakota Acoustic Christmas. Occasionally he arranges for various ensembles and teaches.

JEREMY HEGG
Jeremy Hegg, Music Director for Holiday Jam, is the oldest son of two lifelong music educators, grew up in Dell Rapids, South Dakota, and received his music degree from Augustana College in Sioux Falls. He is the staff arranger and composer for the Augustana Brass Choir, Sioux Falls Municipal Band, and many marching band programs throughout the country.

As a performer, Jeremy is known for his band Spooncat!, which has performed throughout the region since 1996. He has performed around the country and throughout Europe with artists ranging from Smokey Robinson to Chuck Berry. In recent years, he has been a featured guest pianist with South Dakota Acoustic Christmas. In 2008, Jeremy started The Radio Specialists, a group that includes several Holiday Jam members. Jeremy was also the 2003 recipient of the Mayor’s Award for the Performing Arts.

JIMMY GOINGS
Originally from South Dakota, Jimmy Goings is famous for being the lead singer and writer for Santa Esmeralda (now Generation Esmeralda) from 1977-1982. He has played with several South Dakota bands, including Ma’s Boy & Wonderband which were both inducted into the South Dakota Rock & Roll Hall of Fame. Jimmy has worked with Hank since 1997 when they produced his album “World Beat Cowboy” which went on to win SD Album of the Year. They just finished their sixth Studio Album together.

In order to help ensure the safety of all audience members, performers, volunteers, and staff members, masks will be required during this event regardless of vaccination status. For a full list of our current COVID-19 policies, please view our guidelines. If you have any questions regarding this policy, please email [email protected]